Should My Child Receive Fluoride Treatments? Your Dentist Weighs In 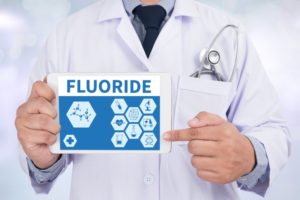 As a parent, one of your primary concerns is protecting your children at all costs. That’s why you’re constantly looking to broaden your bank of knowledge. You want the best information available to guide their wellness. So when it comes to fluoride treatments, one of the hot-button topics that deals with the health of your children, you want more clarity. There is spirited debate over whether it is safe for your their consumption, so your local dentist has decided to weigh in to help you make the best decision for your family.

Fluoride is one the 108 elements found on the periodic table. It’s generally accepted that it is a naturally occurring mineral found in water, certain foods, the earth’s crust and throughout the environment.

How Was It Discovered?

Modern scientists discovered what they would determine to be a benefit of fluoride in the 1930’s. They found that among people who drank fluoridated water, there were 66% fewer cavities than those who lived in areas that didn’t have the same water treatment. They would deduce, then, that putting fluoride in the water was a necessity to reduce the incident of cavities.

Based on this discovery, scientists deemed fluoride as especially important for protecting the enamel of children, since they are usually the population with the least consistent dental hygiene practices.

The enamel of your teeth protects the more sensitive dentin and pulp. Excess bacteria and plaque that accumulate from poor oral hygiene can cause cavities to develop, and lead to tooth decay. So scientists concluded that reinforcing children’s enamel with fluoride better guards against these maladies.

While researchers’ findings seem pretty cut-and-dry, there are new data available contradicting the findings that emerged in the 1930’s. Many parents have become aware of these newer revelations and, as a result, are resistant to the idea of giving their children fluoride treatments.

The Pros and Cons of Fluoride Treatment

To help you make the best decision for your family, your children’s dentist has compared the advantages and disadvantages of fluoride treatment:

Ultimately, you have the ability to make the decision that’s best for you and your family. One important thing to keep in mind, though, is that whatever you choose to do, consistency is of paramount significance. Meaning, your children should be brushing their teeth at least twice a day, whether it’s with a fluoride or non-fluoride toothpaste. They should also be flossing after brushing.

The final piece of the puzzle is your dentist. Sit down and talk with her to determine the best course of action for your family’s oral health and be sure to schedule them for semi-annual cleanings to ensure that they remain well for years to come.

Comments Off on Should My Child Receive Fluoride Treatments? Your Dentist Weighs In

Sorry, the comment form is closed at this time.